A Crowd of Bold Sharemen

On the tenth day of June, boys, as we sailed away
The wind was sou’west as we ran out the bay,
The Maurice being lively we had to move to,
We had a young skipper, likewise a young crew,
And a crowd of bold sharemen

Together, this band represents the finest in Newfoundland traditional song and instrumental music. Their repertoire includes rousing sea shanties and work songs, poignant ballads, comic ditties, folk tales and recitations, and powerhouse jigs, reels, polkas and singles on a variety of instruments.

Take a pair of veteran performers who have appeared at major folk festival across Canada, add Newfoundland & Labrador's most renowned flute and tin whistle player and two of our fastest-rising young stars of traditional music, and you've got A Crowd of Bold Sharemen.

A Crowd of Bold Sharemen have performed to critical acclaim at the JUNO Awards festivities, Cape Breton's Celtic Colours Festival, the Lunenburg Folk Harbour Festival, Ottawa's Atlantic Scene Festival, and have been featured on several CBC national and provincial broadcasts. They have toured in Ireland, Tasmania (Ten Days On the Island), southeastern Australia, and spent the spring of 2011 touring in the UK.

in the back garden, photo by Kaya Payne 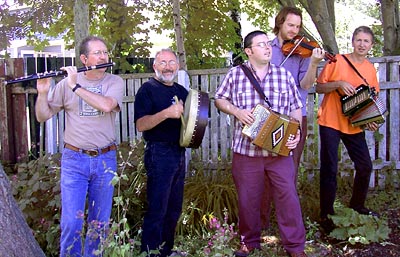 The band consists of Jim Payne, one of the province's best songwriters; Fergus O'Byrne, one of our most recognizable voices; flute player Gerry Strong with his vast knowledge of traditional tunes; noted fiddle player and actor Daniel Payne and accordionist Corey Clarke.

Each is an accomplished performer in their own right, and together they provide an unbeatable musical experience. Their repertoire consists of Newfoundland & Labrador material - virtuoso playing and strong vocals with sweet harmonies, entertaining stage banter, and polished performances.

A Crowd of Bold Sharemen takes its name from a traditional Newfoundland song of the sea. With a line up of musicians that represent every region of the province as well as the diverse musical influences in our rich cultural heritage, they perform a wide variety of traditional songs along with a healthy proportion of modern pieces, many from ECMA nominee Payne. Be sure to catch this fine Newfoundland group -- you'll be glad you did! 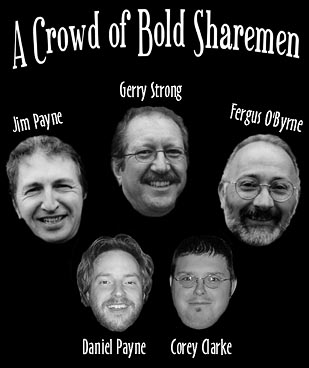 Full bios of Jim, Fergus and Gerry are available under the drop-down Artists menu.

Daniel Payne (fiddle, accordion, whistle, vocals): Daniel comes from a long line of traditional accordion and fiddle players from Cow Head on the Great Northern Penninsula of Newfoundland. He is a well-known singer, storyteller, actor and whistle player who teaches at the Vinland Traditional Music Camp in Gros Morne National Park. Daniel has performed both as a musician and actor throughout North America and Europe.

He is a recipient of the Newfoundland and Labrador Arts Council’s Emerging Artist Award and played a leading role in the Newfoundland-Ireland production of the TV miniseries, Random Passage, a portrayal of life in early Newfoundland. He has also appeared at New York City’s Lincoln Centre with Jack Five-O, a stage adaptation of a series of traditional Newfoundland folk tales 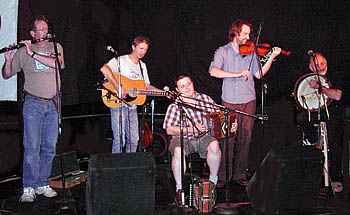 Band members also conduct workshops for all ages in topics ranging from the dynamics of musical instruments (the band plays 14 in all), to all aspects of traditional songs (shanties, work songs, comic ditties, sea ballads, etc.) including song writing, traditional Newfoundland square, set and step dancing, folktales and recitations, and explorations of why folk music has been important to the evolution of rural societies. They also do school shows for all grades and ages, using traditional music to enhance curriculum in music, social studies, marine biology, history, geography, culture and language arts.