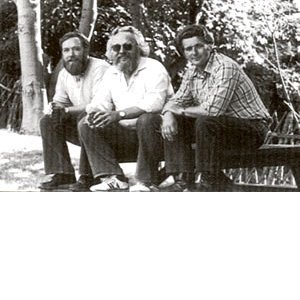 Pat Byrne: Born in Great Paradise, Placentia Bay in 1943, Pat is a published poet and songwriter who has also been active in amateur theatre. He has performed at numerous folk festivals, as well as on radio and television. Pat currently teaches in the English and Folklore Departments at Memorial University, where his academic interests include Newfoundland literature and folklore, Shakespeare, and modern American and Canadian fiction. He has published on the influence of the McNulty family on Newfoundland music, on the manifestations of the tall tale in Newfoundland literature, on invented traditions in Newfoundland popular culture, and on the influence of folklore and literature on the image of Newfoundland within the Canadian context. Most recently, he co-edited Land, Sea & Time, a three-volume anthology of Newfoundland and Labrador texts published by Breakwater Books, which is currently in use in the province's high schools.

Joe Byrne: After moving to St. John's from Placentia Bay at a young age, Joe went on to high school and university in North Carolina in the US, where he developed an appreciation for the country and bluegrass music that he still enjoys. Returning to Newfoundland to do graduate work at Memorial University, he became involved in efforts to popularize and disseminate Newfoundland folk music and song, especially that learned from his aunts, uncles and other relatives in Placentia Bay. These efforts, mostly in partnership with his brother, Pat, resulted in public performances of collected and original material both provincially and nationally, as well as performances in schools across the province, at folk festivals and on radio and television. Joe holds an undergraduate degree in English from the University of North Carolina in Chapel Hill, NC, and obtained his Masters degree in English Language and Literature from Memorial. After some twenty years in various administrative roles at Memorial University, Joe recently returned to teaching undergraduate courses in the English Department, while maintaining his position as Assistant Registrar in Memorial's Registrar's Office.

Baxter Wareham: Born in Harbour Buffett, Placentia Bay, to a musical family, Baxter began performing nationally and internationally as part of the Wareham Brothers in the 1970s. Since then he has been a much sought after performer, both solo and with various groups at folk music festivals, dance festivals and story telling events around North America and Europe. He has performed with the Breakwater Boys, travelled widely with the late Rufus Guinchard, played with Bristol's Hope, and released a solo recording entitled Buffet Double, featuring songs, instrumental music, and stories from Placentia Bay. Retired from a high school teaching career, he is now pursuing a lifelong dream of working at sea, and is presently employed as captain of a pilot boat out of Arnold's Cove.