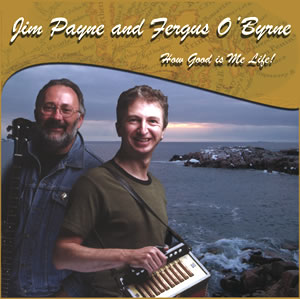 A native of Notre Dame Bay, Newfoundland, Jim Payne is a leading performer, collector and producer of Newfoundland traditional music. He is also one of the province's most prolific songwriters, as well as being a singer of traditional songs, a storyteller, writer, actor, and instructor and caller of traditional Newfoundland set and square dances. He has directed, composed and performed music for some of the most popular theatre productions of the past three decades, as well as creating soundtracks for plays, documentaries and videos. He has performed extensively on radio and television in Canada and abroad, in feature films, and has toured throughout North America, Europe, Japan and Australia.

Jim has a string of recording credits to his name, including solo recordings, contributions to anthologies of Newfoundland music, and support and production work on recordings by other Newfoundland artists. He also owns and operates his own recording label, SingSong Inc., which has released 27 titles, and produces special event programming for conferences, conventions, festivals and other celebrations, and educational and historical events featuring traditional and contemporary music, song, story and dance that reflect the Newfoundland experience.

Jim plays guitar, accordion, mandolin, tin whistle and violin, and has appeared in most of Rising Tide Theatre's Annual Revues, as well as other RTT productions including Newfoundlanders Away, Hold Fast, and Shakespeare's Hamlet.  He is one third of the popular musical comedy trio, Wicked Altogether, with Pete Soucy (Snook) and Fergus O'Byrne, and a member of the traditional music band, A Crowd of Bold Sharemen. He is a past recipient of the NL Arts Council's Arts in Education and Outstanding Cultural Achievement Awards, a Cultural Tourism Award from the provincial Dept. of Tourism and the federal Dept. of Canadian Heritage, and a Queen's Diamond Jubilee Medal. He has developed and teaches a course in traditional Newfoundland accordion music at Memorial University's School of Music, and, for the past several years, has toured oil installations on the Grand Banks of Newfoundland during the week between Christmas and New Year's. In 2011, he was one of five world musicians, and the only one from North America, invited to Japan to participate in a symposium on musicians whose original songs have become part of local traditions.

Jim is also an adventurer who has circumnavigated the island of Newfoundland more than 20 times, sailed through the Northwest Passage and back again, travelled widely through the Canadian and Scandinavian Arctic, including Greenland, Iceland and Svalbard. He has also spent considerable time in the Southern Ocean, crossing the Drake Passage numerous times between Tierra del Fuego and the Antarctic Peninsula, and out to South Georgia and the Falkland Islands.

Born in Dublin, Ireland, Fergus O'Byrne emigrated to Canada in 1967 and, while living in Toronto, became a founding member of the Irish folk band, Ryan's Fancy. The group moved to St. John's, Newfoundland, in 1971 and for the next fourteen years, Fergus toured extensively throughout North America and Ireland as part of the trio. They were featured on the CBC network series, Ryan's Fancy, for five years, and on the Tommy Makem/Ryan's Fancy show, which was syndicated throughout Canada and the world. Ryan's Fancy was also featured in the CBC TV production of The Last Run, which is part of the Newfoundland curriculum for Music (Exploring Music) at the intermediate level.

Ryan's Fancy recorded fourteen albums during its tenure and songs from these albums can still be heard on local and national radio playlists. As a solo performer, Fergus has performed on numerous anthologies and collections of folk music, and has contributed to recordings by Newfoundland artists such as Great Big Sea, Jim Payne, Minnie White, The Sons of Erin, and Christina Smith. He recently produced a double CD collection called Ryan's Fancy: What a Time, featuring material culled from the Ryan's Fancy vinyl recordings of the 70's and 80's.

In 1987 Fergus graduated from Memorial University of Newfoundland with a degree in Education. Since then he has been bringing folk music to children both as a classroom teacher and a performer. He has developed a program of songs, stories and slides related to his native Ireland for use in schools and leads a series of initiatives around the province through the auspices of the St. John's Folk Arts Society called Young Folk at the Hall, designed to get young people playing traditional music.

Fergus has served on the board of directors for the St. John's Folk Arts Society and spent several years volunteering at the Newfoundland and Labrador Folk Festival. He organizes the St. John's Canada Day Concert on Confederation Hill, and was Chair of the Education Committee for the 2010 Juno Awards in St. John's.

Fergus has been a member of the award-winning band Tickle Harbour, and is a past recipient of the NL Arts Council's Arts in Education Award, as well as Music NL's Music Educator of the Year Award. In 2004, Ryan's Fancy received the ECMA's Dr. Helen Creighton Award, in recognition of three individuals who had "a profound and lasting effect on the Atlantic Canadian music industry". 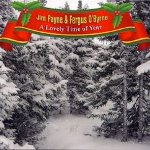 A Lovely Time of Year