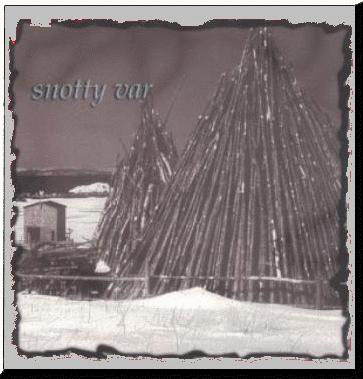 1. An old fir-tree, with resin clotted
on the bark. (Dictionary of Newfoundland English).

The Snotty Var project is the brainchild of bodhran player Rick West who started the group with two other scientists from the Canadian Forestry Service. Playing many of the old favourite Newfoundland and Irish tunes, they began to sit in on some of the musical sessions that are part of the pub scene in downtown St. John's.

In the fashion that has been part of Newfoundland's social life for generations, they brought some of their musical friends from these sessions into the studio to play on the album. During the recording process, two of the original members were transferred out of the province, but by then the idea had become bigger than the band, and the recording was completed with a veritable who's who of the St. John's traditional music scene.

The result is an incredible collection of instrumental music that captures the mood of a rip-roaring, toe-tapping pub session. The full and dynamic sound of the group superbly highlighted by individual virtuoso playing. The tunes range from the gregarious to the quietly haunting, with new twists on old tunes, and are played consistently with great energy and respect for the traditions from which both music and musicians have emerged.

John Bishop (tin whistle, flute)
John's flowing style is greatly admired and he has had many a gig with various combinations of trad musicians in St. John's. He also has contributed to CDs by Jim Joyce and Arthur O'Brien.

Rob Brown (guitar)
Rob's flawless rhythm and great chording drives the Snotty CD. Rob is adding to his reputation as a session cornerstone by becoming a master of the uillean pipes.When not playing music, Rob works as a researcher at the Marine Institute in St. John's studying the behaviour of ships in ice. He is also the Vice-President of the St. John's Folk Arts Society and is the sound man for the Newfoundland Folk Music Club

Michelle Brophy (flute)
Michelle's interest in the blackwood flute began when she was captivated by traditional music while attending Willie Week in Ireland early in the 1990s. Since then she has played frequently at sessions, pub gigs and danceups. Along with her husband, Rob Brown, she has helped develop the very successful intrumental workshop series held every year at the Newfoundland and Labrador Folk Festival. Michelle also loves wood-working and assists Neil O'Grady of Carbonear in the making of uillean pipes.

Allan Carroll (bouzouki, mandolin)
Allan recommended that Snotty Var be used to name the CD project and wrote and played the counterpoint used for the bouzouki and mandolin tracks. From Gibson's Landing, B.C. Allan now lives in Victoria where he works as a bug scientist with the Canadian Forest Service.

Jim Fidler (Egyptian Def drum, chicken shakes)
Jim is an innovative master of rhythm and much appreciated by trad fans in Atlantic Canada and St. Pierre and Miquelon. He was a percussionist and guitarist for the highly successful reggae band, Pressure Drop, and his solo work, Gypsy, was voted the Newfoundland Music Industry Association's Album of the Year. His second CD, Friendly Fire, was released in 2000 and a third CD is expected in 2003.

Mike Hanrahan (banjo and bouzouki)
At the time of the Snotty Var recording, Mike was only in his late teens but had been playing strings for many years. A lengthy training in classical guitar contributed to his quick adaptation to traditional music and he now a fixture of the St. John's music scene. Mike has performed as a guest musician on a number of CDs and currently is a member of the renowned Irish Descendants.

Pat Moran (fiddle)
Pat has been performing since the age of 7 and has developed into a brilliant fiddle player. He is best known as a member of the popular bands, The Punters and Tickle Harbour, but also is active as a guest musician, contributing to many other CDs.

Frank Maher (accordion)
Frank is one of Newfoundland's best known accordionists having played with the Quidi Vidi Minstrels, the legendary Figgy Duff and the Plankerdown Band. Frank possesses a rapier wit and a fine collection of traditional music from the 1920s and 30s. He has recorded for over 30 traditional albums and is frequently featured on radio broadcasts and festivals across Canada. He plays regularly with the Auntie Crae Band and occasionally at festivals with Mahers Bahers.

Francesca Swann (cello)
The cello adds a welcome dimension to traditional music, expanding a tune's range by providing a lyrical bottom end. Francesca, a member of Tickle Harbour and host/producer of CBC Radio's MusicCraft, has an extensive background in music including a 5-year stint as producer of Gilmour's Albums.

Rick West (bodhran)
A CFS entomologist who decided not to relocate despite the closure of the St. John's lab ("I wasn't born a Newfoundlander, but I'm going to die one"), Rick coordinated the Snotty Var CD project. A frequent player at sessions and at the St. John's Folk Arts Council folk night, Rick also plays with The Auntie Crae Band and Mahers Bahers. He has contributed to several CDs including those by Eamonn Dillon, Atlantic Union and Erin Cassidy.

Don Walsh (producer/arranger)
Don has produced some of the best traditional music ever recorded in Newfoundland and has played with major bands including Red Island and The Plankerdown Band. The founder and guitarist behind Tickle Harbour, Don also has an enviable studio reputation having produced CDs for international stars like uillean piper, Paddy Keenan.