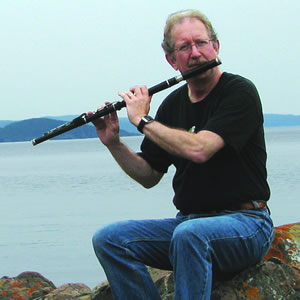 Gerry Strong is from Little Bay Islands, Notre Dame Bay, and grew up there and in Little Bay, a short distance away. He first learned to play the piano from his mother and went on to play the E flat horn in the Grant Collegiate Brass Band in Springdale where he attended school.

His parents moved to Ireland just before he finished high school, which marked the beginning of his immersion in traditional music. Around the same time as his mother bought him a recorder, his older sister bought an album by what was then a brand new Irish traditional music group called Planxty. Along with the Bothy Band, Planxty would become a major influence on Gerry’s interest in music, and in no time at all he switched from the recorder to the tin whistle.

While working in Stephenville Crossing in the early 1970’s, Gerry became more involved in the local music scene through the influence of Stephenville physician, Dr. Kevin McCann, who introduced Gerry to several traditional west coast musicians such as Emile Benoit and Ed Doucette, among others. Around the same time, local bands Red Island and Figgy Duff were experimenting with and developing new and exciting ways of playing local music, and Gerry became part of the renewal of interest in the folk and traditional music of Newfoundland and Labrador.

He subsequently became a founding member of the award winning group, Tickle Harbour, and a frequently sought after accompanying musician for an extensive variety of local musicians. As well as being the province’s foremost tin whistle player, he was also introduced to the wooden flute through Tickle Harbour alumnus Rob Murphy, and has since become the province’s leading musician on both these instruments.

Gerry travelled extensively throughout Canada and the US while playing with Tickle Harbour, and through Ireland and Australia with his most recent musical ensemble, A Crowd of Bold Sharemen. While he has recorded with an astonishing array of musical groups, all while holding down a job as X-ray technologist at the Carbonear General Hospital, Velvet In the Wind is his first solo recording.

Selected Recordings on which Gerry has played as a sideman: 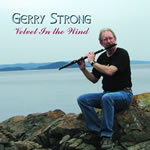